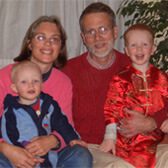 Dr. Mark Zimmerman is a United Methodist missionary assigned to work along side his wife Deirdre Zimmerman, in Kathmandu, Nepal, a predominantly Hindu country in the Himalayan region of Asia.

A medical doctor specializing in internal medicine, Mark has been working in Nepal since 1986. He initially began as a clinical doctor and later became medical director of Patan Hospital (1998-2005). When that hospital ceased being a mission hospital, he became founding director of the Nick Simons Institute (NSI) (2006-16), a charitable organization supporting government health care workers across remote regions of Nepal. Since August 2016, Mark has returned to work as senior consultant and professor in Patan Hospital, which has grown into a government medical school, the Patan Academy of Health Sciences. In addition to patient care responsibilities, he teaches medical students and is involved in establishing a training program for internal medicine specialists.

“Returning to walk the halls and wards of Patan Hospital is like rediscovering a first love. After 18 years mostly in administration, I’m delighted to be back fulltime taking care of patients – listening to their stories, touching their sick bodies, walking with them over uneven ground. I’ve also formed immediate, close bonds with the young medical students, who deepen my understanding of the privilege of being a physician. What I wrote thirty years ago on first entering Patan Hospital still applies today: ‘This work is a wonderful chance for Jesus’ love to flow through me to others. Your prayers will bless the many whom I meet.’”

During the summer of 1980, Mark worked as a medical student in a hospital in The Gambia, West Africa, and that experience stimulated his interest in overseas medicine. After completing his internal medicine training in 1986, he worked for two years as a doctor in Nepal, supported by funds from the United Methodist Women. This experience led Mark in 1990 to become a long-term Global Ministries missionary.

A native of Warminster, PA, Dr. Zimmerman holds a B.A. from Johns Hopkins University and an M.D. from Dartmouth Medical School. He did his residency in Internal Medicine at Upstate Medical Center in Syracuse, NY.