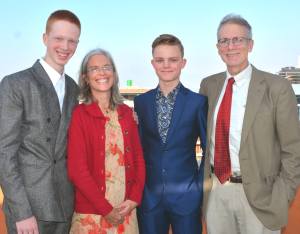 Serving At: Nutrition Promotion and Consultancy Services
Home Country: Ireland, Europe and Eurasia
WAYS TO REACH ME:
Email Me

Deirdre Zimmerman is a missionary with the General Board of Global Ministries of the United Methodist Church – in partnership with the Church Missionary Society of Ireland – serving with her husband, Dr. Mark Zimmerman, in Kathmandu, Nepal.

A nutritionist and dietitian by training, Deirdre was first assigned to work for United Mission to Nepal’s Nutrition Programme, which addresses the problem of malnutrition in women and children through community-based projects, provision of training, development of nutrition resources and research & advocacy.  After a break while their sons, Zachary and Benjamin, were young, Deirdre has since worked as advisor to Nutrition Promotion and Consultancy Service (NPCS), an organization which was born out of the previous Nutrition Programme.

Deirdre is also assigned to work as a dietitian at Patan Hospital, a busy teaching hospital in Kathmandu where her husband works as professor and doctor.  After 3 years working in a consulting role, the hospital has now hired local staff whom Deirdre is leading in the establishment of a full-service dietetic department.

Of her work Deirdre shares, “I see this as involvement in God’s work to restore full life and to provide for all the needs of all people: nutrition and health (in all its facets) being essential for people to achieve their God-given potential.”

In addition to her formal role, Deirdre understands her assignment as a ‘ministry of presence.’ “I hope my presence in Nepal as a United Methodist missionary can encourage the local Nepali church that the universal church stands in solidarity with them (a minority faith in a Hindu country), and that I may be a channel for bringing some of the experiences and gifts of the Nepal church into American and Irish churches.”

A native of Ireland, Deirdre earned a Bachelor of Science degree in Human Nutrition and Dietetics in 1993 from Trinity College/Dublin Institute of Technology. She earned certification in tropical community medicine and health in 1996 from the Liverpool School of Tropical Medicine, and in 1999 was certified in the management of food and nutrition programs by the International Agricultural Centre in the Netherlands. From 1993-1995 Deirdre was a clinical dietitian at Birmingham England Heartlands Hospital where she later worked as a senior paediatric dietitian.  Having spent their entire childhood in Nepal, Deirdre and Mark’s two sons are now studying in the US.