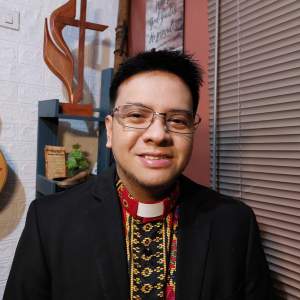 Dexter is an elder in the Southern Tagalog Provisional Philippines Annual Conference East. After earning a Bachelor of Arts degree in political science, he attended Union Theological Seminary, Manila, Philippines, where he received a Master of Divinity degree. Most recently serving as superintendent of Quezon and Laguna districts, he previously was administrative pastor of Pacita United Methodist Church, San Pedro, Laguna, Philippines.

Dexter and his spouse, Laraine Abobon-Ceballos, are the parents of two children, ages 15 and 22.

“My maternal grandfather was a Methodist pastor,” Dexter said, “so I grew up in a Methodist family.” Yet, he had many questions about God and humanity, he said, especially after his father left.

“I questioned God’s existence and power because of the extreme poverty that we were experiencing as a family,” Dexter said. “I could not reconcile the reality of a God who allowed such pain in our lives.” The family struggled emotionally and financially.

During an evangelistic event at a youth camp, however, Dexter said, “like John Wesley, I felt my heart strangely warmed. I decided to surrender my life fully to God and put my faith in Jesus Christ.” Dexter was 17.

He began engaging in various church ministries, and at age 18, he started preaching in his church and sharing the gospel in the streets, on public buses and in the market area.

“After graduating from college,” Dexter continued, “I entered the seminary to start my journey of ordination, and I happily serve God and the people by leading the church in fulfilling the Great Commission.”

As a pastor for more than 20 years, he admitted, “there’s a longing in my heart and a strong desire to share God’s love [with] other cultures of different faiths. I believe God is calling me to go out of my comfort zones and follow his leading to further share God’s love with all people.”

The Mongolia Mission Initiative, where Dexter is assigned, continues to progress steadily, especially in the areas of congregational and leadership development, Christian education and social ministries. Initiative leaders envision a strong, vibrant and witnessing church in Mongolia, and the role of the country director is crucial in realizing this vision.

In and around Ulaanbaatar, the capital city, are two children’s ministry centers, a detention ministry, a hospice ministry and 12 United Methodist churches. Two of these congregations, with membership exceeding 200, serve local communities through various outreach ministries, including after-school programs for children.

A major characteristic of United Methodist mission in Mongolia is the large number of highly educated young adults in the church. They play significant leadership roles in developing and expanding the church’s ministries. One of Dexter’s responsibilities is to teach Wesleyan studies at Mongolia Trinity Bible College, where most of the country’s future UMC pastors are trained.