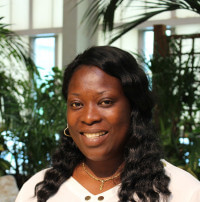 Nana Kutela Fatuma is a missionary with the General Board of Global Ministries of The United Methodist Church serving as an agricultural technician in the West Angola Annual Conference. She began her service in 2016. Her husband, Dieudonne Kutela Katembo, is also a missionary in East Angola.

Food security and agriculture are important ministry components of the West Angola Annual Conference, where 75 percent of the 300 congregations are in rural areas. The church seeks to support farming projects and help communities achieve economic self-sufficiency. It maintains an agriculture school in Caxito and has a partnership with the government’s Agriculture Development Institute. The latter provides seeds and fertilizer.

Fatuma is from Lubumbashi in the Democratic Republic of Congo where she is a member of the Galilee United Methodist Church in the South Congo-Zambia Annual Conference. She received her bachelor’s degree in agriculture and natural resources from Africa University, a United Methodist-related institution in Zimbabwe. She has worked as director and assistant to the director of orphanages and as a farm manager and agricultural researcher.

Born into a devout Christian home and raised in the church, Fatuma believes God began preparing her for mission service as a child, when at the age of 12 she began caring for youngsters in her congregation, teaching them good values. “God did not stop there…When I married, I had to care for two orphaned girls from my family, and then I became an assistant to the director of an orphanage where I spent seven years. Helping people in need became my life.”

Fatuma believes that God is responsible for making it possible now to use her knowledge of agriculture in mission. “Since God is faithful, he allowed my husband to become a missionary, opening the way for me to become what he wants me to be.”