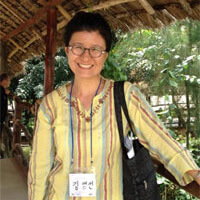 Serving At: Next Generation Ministries
Home Country: South Korea, Asia and Pacific
WAYS TO REACH ME:
Email Me

The Rev. Young Seon (Christina) Kim is a missionary with the General Board of Global Ministries of The United Methodist Church serving as director of the Next Generation Ministries of the church in Tanzania, based in Dar es Salaam.

Next Generation is an effort to recruit and equip young leadership for ministry and mission in a country with a youthful population and where United Methodists shows promise of extensive growth. In 2014, Tanzania was a provisional annual conference, with plans to become a full annual (regional) conference as soon as possible within the North Katanga Episcopal Area, centered in the Democratic Republic of Congo. The first United Methodist missionaries in Tanzania came from DR Congo.

Objectives of Rev. Kim’s work include the preparation of pastors and lay leaders with skills in relating to young people and analysis of the youth ministries presently underway in each of the church’s districts. Tanzania is a country of some 50 million people of diverse religions, including Christianity, Islam, and traditional African faiths.

Rev. Kim, a native of South Korea, is a clergy member of the Northern Illinois Annual Conference, ordained an elder in 1999. She received her theological education at Garrett-Evangelical Theological Seminary, Evanston, Illinois, graduating in 1997 with a Master of Divinity degree. She earlier earned a Master of Arts degree in TESOL (Teachers of English to Speakers of Other Languages) from Southern Illinois University in Carbondale, and a Bachelor of Arts degree in English at Dongguk University, Seoul, Korea.

Rev. Kim is the first Christian in her family and has led other family members into the church. Her introduction to Jesus and Christian faith came in vacation Bible school when she was eight years old. At age 18, she made a commitment to missionary service. “I said to God, ‘Yes, I will go wherever you want me to go and I will do whatever you ask me to do.’”

Young Seon says that she never lost her “heart’s desire to do overseas mission.” In 2011, she attended a youth conference in Kenya and felt a strong pull to service in Africa. Back home in Illinois, her bishop referred her to Global Ministries. While the process of missionary service application and acceptance was taking place, she went to Tanzania to teach English and to learn Swahili. She thanks God that she is back in Tanzania today.

“The way God has been guiding my steps in amazing,” says Young Seon. “The love God has been pouring out upon my heart is beyond my imagination.”