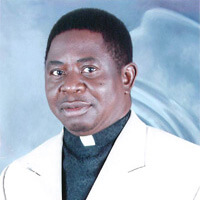 He is also the legal representative in Tanzania of the bishop of North Katanga in the Democratic Republic of Congo (DRC). The North Katanga Conference, where Rev. Wa Mushidi was ordained and holds membership, pioneered the United Methodist work in Tanzania starting in the early 1990s. The church in Tanzania is now moving toward annual conference status.

He says that his primary function “is to proclaim Christ to the world while working for God’s reign of grace, peace, and justice.”

Mutwale is an evangelist, church planter and builder, and community developer. He ministers to persons of all ages and genders, including refugees. He and his wife, Kabaka Ndala Alphosine, also a missionary, work together in providing Christian education and health information, especially related to HIV/AIDS.

The church in Tanzania is growing and reaching out. “People are changing according to God’s word; refugees are being consoled,” he says.

Mutwale has served in Tanzania since 1992, when the North Katanga Annual Conference sent several evangelists and their families there. “It was hard for us, a sacrifice for our families,” Mutwale recalls. “I knew God was moving through my ministry because we did not stop the mission; God was encouraging us.” He became a missionary with Global Ministries in 2001.

A native of Katombe, DRC, Mutwale was an associate headmaster in a primary school in Tenke, DRC, before earning a bachelor’s degree in divinity at the seminary in Mulungwishi, DRC. He then served as a pastor, chaplain, and teacher in Kabongo and as a pastor and chaplain in a secondary school in Kalemie. He was ordained as a deacon in 1986 and as an elder in 1987.