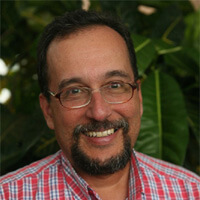 Serving At: Evangelical Seminary of Puerto Rico
Home Country: Puerto Rico, Latin America and the Caribbean
WAYS TO REACH ME:
Email Me

The Rev. Ediberto Lopez, Ph.D., is a General Board of Global Ministries missionary assigned to the Evangelical Seminary of Puerto Rico. He was appointed to the seminary in 1992 as Professor of New Testament Studies as well as Greek.

In the last 12 years, Dr. Lopez has served more than 1000 candidates for ministry in the Methodist tradition, as well as other denominations, in the area of New Testament Studies. Dr. Lopez has served as a well known preacher in the Methodist Churches of Puerto Rico and other denominations, and as a lecturer in the academic arena. Dr. Lopez has published extensively in Sunday School material for adults. He has been a regular contributor to Ribla, an academic journal in Biblical Studies in Latin America and Brazil.

Dr. Lopez graduated from Drew University with a Ph.D. in New Testament Studies in 1992, and received a Masters in Sacred Theology from Union Seminary in 1986.

Dr. Lopez is a United Methodist elder, and member of NYAC and the Methodist Church of Puerto Rico. He is married to Ms. Vilma Rodriguez, and they have four adult children: Jared, Patria, Ediberto, and Moises, and one grandchild, Noah.