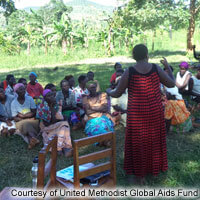 At the beginning of 2016, approximately 37 million people around the world were living with HIV or AIDS. Young people and particularly women are increasingly affected – nearly half of all AIDS patients are women and, sadly, each day 700 HIV positive babies are born to HIV Positive Mothers.

The United Methodist Global AIDS Fund (UMGAF) began in 2004 in response to the global AIDS pandemic. Between January 2006 and September 2017, funding has been awarded for 296 projects in 44 countries. At this time, UMGAF grants are focused on Awareness, and HIV Counselling and Testing for pregnant women, youth and young adults. Since the emphasis on the Prevention of Mother to Child Transmission began in 2014, 1. 14,158 Women have received Counselling and Testing, and 2. 83,736 People have been reached with awareness and education

The goal is to Promote HIV Awareness and prevent HIV infection and transmission through counselling, testing and follow up services. This work is part of the denomination’s Abundant Health Initiative: supporting work to stop preventable disease and death. Twenty-five (25) Percent of funds raised within US Annual Conferences for global HIV work, can be retained by that Conference for their own local HIV and AIDS programs.