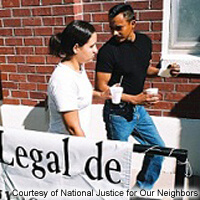 According to the U.S. Census Bureau’s 2013 American Community Survey, approximately 41.3 million immigrants are living in the United States and account for 13% of the total population. Of this total immigrant population, 53% are lawful permanent residents, undocumented immigrants, and legal residents on temporary visas. The U.S. Department of Homeland Security estimates that there are 11.4 million undocumented immigrants residing in the United States as of January 2012. The low-income status of many immigrants makes it difficult to not only afford the services of immigration attorneys, but also application fees. This means that nonprofit immigration legal service providers are often the best option for obtaining high-quality, low-cost assistance for addressing their legal situation. Although a critical obstacle, limited financial resources is just one barrier immigrants face in obtaining legal representation. Limited English proficiency makes it difficult to navigate a complex U.S. immigration system that operates almost exclusively in English. Fear of deportation may prompt some immigrants to tolerate unsafe and abusive conditions at work or home. The underlying causes of the challenges that undocumented and other vulnerable immigrants face in accessing justice can be attributed to a complex U.S. immigration system that is extremely difficult and time consuming to navigate as well as a political environment where Congress is unable to agree upon meaningful reform. For example, On November 20, 2014 President Obama announced deferred action for parents of Americans (DAPA) as well as an expansion of deferred action for childhood arrivals (DACA) for undocumented immigrants who arrived in the U.S. before turning 16 years old. The Migration Policy Institute (MPI) estimates that 5.2 million unauthorized immigrants, nearly half of all undocumented immigrants in the United States, will benefit from this Executive Action. Before this Executive Action could proceed, a federal district court in the Southern District of Texas issued an injunction in February 2015 that has temporarily blocked DAPA/DACA. Since then this case has worked its way up to the U.S. Supreme Court, which will be reviewed later in 2016. As a result, millions of undocumented immigrants are unable to fully participate in U.S. society. The longer the country continues to operate with a broken immigration system the greater our loss as a nation in terms of economic productivity and participation in civil society, as well as reduced physical, psychological, and material well-being that occurs when families are torn apart.

NJFON will continue to build the organizational capacity of a national network of JFON sites that are able to help more low-income immigrants be informed of their rights and address their legal situation for matters that can be addressed through the U.S. Immigration Court. Our work involves strengthening the JFON network so that clients are better served, JFON sites can continue to operate independently, and volunteers can work effectively. NJFON will continue to support the JFON network in the ways that have proved most effective, including providing guidance to JFON sites on standards for operating legal clinics, procedures for recruiting and managing volunteers, managing expansion of the network to include new sites and legal clinics, and providing a forum for sites to learn from each other’s experiences and share best practices. We will also continue to provide monitoring and oversight by Consulting Attorneys through annual site visits, regular 1:1 consultations and network-wide attorney calls, and review of case numbers and legal procedures. We will continue to resource sites with tools to ensure the highest quality of services, such as access to a web-based case management system and to hundreds of shared files for use by JFON attorneys, as well as membership with the American Immigration Lawyers Association. NJFON will also augment resources currently provided to the JFON network through new initiatives that can help increase the number of clients served. For example, we started an “Innovation Fund” in 2015 to encourage sites to bring forward programmatic ideas with the primary requirement being that they need to be replicable and can benefit the network as a whole. Already, exciting initiatives are underway including carrying out high-impact litigation to magnify the number of clients served through our work, utilizing a mobile clinic to meet with clients in their own communities, and strengthening our work with victims of human trafficking. We will also help sites obtain highly skilled executive directors on staff who can sustain and grow legal representation, education and advocacy programs at the local level. Small sites that employ only a staff attorney find it challenging to expand, so NJFON will assist sites with employing experienced leadership who can oversee the development of sites and enable them to serve more clients in their communities. What sets the JFON network apart from other immigration legal service providers is our volunteer driven model whereby hundreds of church and community members across the United States donate their time to demonstrate what it means to be a good neighbor to newcomers. Church volunteers are the backbone of our legal clinics; they perform essential duties from scheduling appointments to conducting intake interviews. Another distinguishing factor is a commitment to hospitality where immigrants are warmly welcomed into a caring environment and each person is treated with dignity regardless of his/her background or immigration status.

Low-income immigrants in underserved communities throughout the U.S. have their rights protected as a result of access to high-quality, low-cost legal immigration services provided by a national network of JFON sites that are financially and organizationally sustainable.