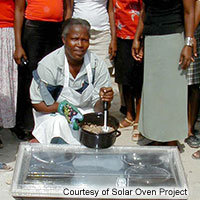 Empowering people to use solar energy to meet their cooking needs

“There are so many Dominicans who do not receive a living wage and live on the edge of being hungry,” says long-time Global Ministries missionary Gordon Graner. “Any money they can save by using solar energy—which is free to all—instead of paying for fuel is more significant than I had imagined.” He estimates that at least half of the members of the Iglesia Evangélica Dominicana are in this economic group. In addition, he explained, there are workers in communities called Bateys—traditionally connected to sugar cane fields and often including Haitians—that are living in “grinding poverty.” “For people like these,” Gordon said, “a solar oven could be a life saver. I would estimate that half of the population of the Dominican Republic would benefit from a solar oven.” Lucy Sanchez worked with her pastor during the August 2015 solar cooking and oven assembly demonstrations at Baní, Dominican Republic. Lucy says she only cooks food once a day in order to save money on gas, a common cooking fuel in the Dominican Republic. It costs more than $10 to fill her small cylinder—and so she only buys a small amount at a time. “The majority of people in our church are from a low economic level. We don’t have a lot of resources but we’re trying to provide a good life for our children and to take good care of our parents. Everything about this solar oven project is positive!” The Rev. Aefreda Espinosa in the Barahona Province of the Dominican Republic, says, “I have many poor people in my church and they can’t always afford gas. Even if they can find wood to cook with it’s expensive and not good for the environment. This is a wonderful project.” Poverty statistics according to the United Nations World Food Program reveal this about the Dominican Republic: (1) Population 10.7 million with poorest half receiving less than one fifth of GDP (wealth). (2) 40.9% live in poverty, meaning that even government subsidized propane is an economic hardship, such that many burn wood because charcoal production is (theoretically) banned by the government. (3) 7% of the population suffers chronic under-nutrition w/ particular provinces presenting rates 2 to 3 times higher. (4) Under-nutrition is irreversible in children under 2-years-old if they do not receive enough nutritious food. A major need in Dominican communities is to alleviate hunger, and Solar Oven Partners UMC is a hunger ministry. In addition, many Dominicans struggle finding access to safe drinking water and a solar oven provides families with the capability to pasteurize their drinking water. Another major need is one of building relationships, between/among various communities, with the community of Christ. Gordon Graner says, “Distributing solar ovens through the church, in the name of Christ, is a concrete example of God’s love reaching out in response to the cries of the poor. It is Good News plain and simple.”

The new solar oven training and distribution program in the DR is already underway. Shipments containing 1,130 solar ovens and 5,380 black enamel cooking pots have been received in the DR between July 2015 and February 2016, with 60-70 solar oven kits distributed thus far (February 2016). Work in establishing the program is ongoing under the direction of the IED and the Graners, with support from UMVIM teams (next scheduled team is March 7-18, 2016) organized by the Dakotas conference. Production of solar ovens in the Dakotas is also ongoing as work has begun on another sea container shipment of 1,150 solar ovens. Volunteers are being recruited and scheduled to serve in our 3 workshops in the Dakotas as well as for mission travel to the DR. The financial commitment for providing 1,150 solar oven kits, including transportation to the DR via sea freight, is currently about $130,000. Funding comes from a variety of efforts including promotion through The Advance, targeted fundraising, personal contacts, and grant writing. United Methodists from across our connectional church are the primary source of thousands of hours of volunteer service and many more thousands of mission dollars. To create ownership, IED has determined that each new solar cook will pay 1,000 Pesos (~US $22) to receive their solar oven kit, after attending a required 2-day training seminar. The seminars educate users on the concepts and benefits of using free solar energy, as well as, providing hands-on training in the assembly, use and cooking of various meals for their families. All funds collected from the training/distribution efforts will be used by the IED for program operation. The personal investment to attend the training and pay for the solar oven—though less than the actual costs—provides amazing return on investment with savings in fuel and bottled water costs over years.

The primary goal and long term impact are essentially the same as the objectives and immediate impact addressed in the next question, but multiplied. Cost savings on fuel to cook daily meals. Health benefits from pasteurizing drinking water and avoiding smoke inhalation from cooking fire. The conservation from helping to stem the tide of deforestation can all be achieved on a personal level, but also with impacts that are multiplied to benefit communities. Even nations and the world, given a sustained effort to train individuals and provide them with the opportunity to invest in solar cooking. That is a God-sized vision, so the project goal becomes sharing with the poor after the example of Mother Teresa, or one oven…one oven…one oven.

An improved quality of life for families, including more discretionary income resulting from the savings realized by cooking many of their meals without a cost for cooking fuel. Specifically, our hope and prayer is to see savings invested in better family nutrition and education of children.