Central Asia In Mission Together 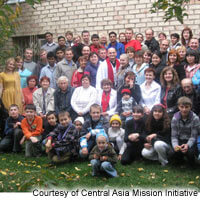 Supporting new churches through leadership training, ministry with the poor, and healthcare programs.

The General Board of Global Ministries started its ministry in Central Asia in 2003. The region, which included Kazakhstan, Kyrgyzstan, Uzbekistan, and Tajikistan, went through major political and economic changes since the break-up of the Soviet Union. However, for the church, the most significant change was new religious freedom to serve people both spiritually and through social outreach. The United Methodist Mission Center of Central Asia was established to serve the many ministries of this region. One of the primary tasks has been to create faith communities throughout Central Asia. Each of these communities has a unique ministry that matches the needs of their respective local communities. Some groups focus on youth, women, or the elderly while others focus on rural poverty and recovery from addiction. Outreach to young adults throughout the regions has especially been critical to the growth of the churches in Central Asia. The Bishkek Mission Center was established in Kyrgyzstan to provide social and health services to both the local community and throughout Central Asia. The Ushtobe Youth Center in Kazakhstan focuses on young adults struggling with addiction and unemployment, in addition to ministering to Korean descendants in the area still living in poverty after their deportation by Stalin from the Far East of Russia nearly 70 years ago. The persecution of Christians in certain parts of Central Asia, including Tajikistan and Uzbekistan, has been one of the main challenges of this region. Despite the unstable political and religious climate in these regions, the Methodist Church remains committed and hopeful in its growing presence throughout all of Central Asia.