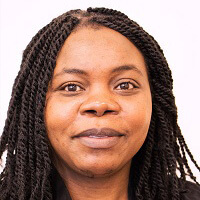 The Rev. Tazvionepi Nyarota is a missionary with The United Methodist General Board of Global Ministries serving as mission coordinator for the Zimbabwean community in Western Canada. This ministry is in partnership with the United Church of Canada and the United Methodist Church of Zimbabwe. She was commissioned in the Spring of 2017.

United Methodist migrants from Zimbabwe brought their church with them when they moved into the western Canadian provinces, notably Alberta and British Columbia, only there was no Methodist annual conference with which to affiliate since the former Methodist Church in Canada is now part of the United Church. The Edmonton Presbytery of the United Church provided welcome, care and support for the new fellowship in Edmonton, which also retain ties to the United Methodist Church in Zimbabwe. Global Ministries joined the partnership in 2017 by naming a mission coordinator.

Tazvionepi is an ordained elder in the Zimbabwe East Annual Conference. She was superintendent of the Mutare District and associate pastor of St. Peter United Methodist Church in Mutare prior to going to Canada in 2014, appointed by her bishop as pastor to the flock leaving home for a new land.She holds several academic and practical ministry degrees, beginning with a diploma in religious studies from the University of Zimbabwe in Harare in 1996, followed by a diploma in theology from United Theological College in 1997, and Bachelor of Divinity in 2006 and Master of Arts in Religious Studies from Africa University in 2013.

“I see my faith journey as totally in God’s hands,” Tazvionepi says. “I have learned to submit to God’s plan and to listen to God when he speaks. Great things are achievable when God takes the lead. “I feel being called to mission work has its genesis in the call to pastoral ministry. It is a calling to serve and not to be served. I always feel satisfied when I get involved together with the people in ministry. “Being [in Canada] away from my homeland, my culture, and tradition introduced me to new cultures and at times new language in order to communicate well. This move knocked in my senses that God is calling and my response is, “here I am Lord, send me.” Tazvionepi is married to Lloyd Nyarota and the couple has two children.