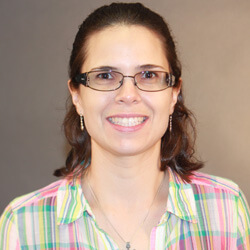 Serving At: Leadership Development for Women in Latin America
Home Country: Brazil, Latin America and the Caribbean
WAYS TO REACH ME:
Email Me

Andrea Reily Rocha Soares is a missionary with the General Board of Global Ministries of The United Methodist Church, serving as a regional missionary for leadership development with women in Latin America. Regional missionaries are selected and supported by United Methodist Women and placed in collaboration with the church’s General Board of Global Ministries. Andrea was commissioned in October 2015.

Andrea serves as the main connection to the national office of United Methodist Women on health, empowerment, and gender issues throughout Latin America. The regional missionary program was launched in 2000 to support leadership and organizational development of ministries among women, children, and youth in broad areas.

Andrea is a native of Ribeirão Preto, Brazil and after November 2015, an elder in the Methodist Church in Brazil. Prior to entering mission service, she was assistant pastor of the Central Methodist Church in Birigui, Brazil. She holds a Bachelor of Arts degree in religion and Spanish Cultural Studies from Emory and Henry College in Virginia; a bachelor’s degree in theology from the Methodist University of São Paulo, and a Master of Divinity degree in mission studies from Boston University School of Theology. She has worked as an English teacher and an interim pastor in Ribeirão Preto.

Born into a home with a Brazilian Catholic father and an American Protestant mother, Andrea was surrounded by Christian love, baptized as an infant, and became a member of the Methodist Church in Brazil at age 14. Her faith journey, she states, has been one of discovery of “who God is and who I am. It has been a voyage of learning to love, hope, and have faith—a journey of living out the extraordinary, of encountering the divine.”

Her journey included living in Brazil, Chile, Northern Ireland, England, and the United States in her youthful years. She is a citizen of both Brazil and the US. Her personal and spiritual search led her to her discovery of mission. In college, she developed an interest in religious studies and in teaching. “After four years in college, my sense of inner call to mission service continued to be confirmed on a regular basis,” she recalls.

Andrea says a “little spark of God’s grace” led her to seminary. In those years, she worked with immigrant church communities and did internships with faith-based social organizations in London. She prepared for many years for mission service, taking in all the experiences she could in many settings and contexts, constantly searching for experiences to get her ready for new paths and doors to God’s reign.

She was married to Heber Sanches Soares in May 2015.