Reintegration of Women with Mental Illness 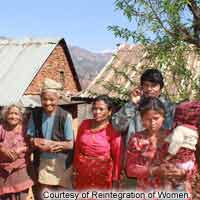 In Nepal Gender-based violence (GBV) and Violence against women and girls (VAWG) has played a major role in shaping female lives, additionally, Nepalese women experience hardship through inhumane cultural practices. This exposure to violence and cultural practices have often manifested into severe psychosocial issues. Violence can be defined in many ways e.g. rape, sexual abuse, trafficking of women and girls for sexual exploitation, female infanticide, punishment for witchcraft. The Government of Nepal conducted a study on GBV in 2012, it showed that 48% of women reported that they had experienced violence at some point in their life. Nepali culture has been deeply embedded in Nepalese people, this has resulted in the continuous malpractice of child marriage, polygamy, Chhaupadi (the practice of menstruating women being considered impure, thus, forced to live in sheds and prohibited from touching food as well as others) and Dowry (transfer of parental property, gifts or money at the marriage of a daughter). Even though these have been banned in Nepal, they continue to be a source of GBV for many women. These malpractices and violence are resulting in women developing mental and psychosocial issues. Due to the misconception of mental health, families neglect women experiencing psychosocial issues and even abandoned them in the streets or lock them up at home. After abandonment, women become more susceptible to sexual abuse and become pregnant. These actions and exploitations can sometimes contribute to women committing suicide, where a study showed that suicide is the leading cause of death among Nepalese women between the age group of 15-49. Due to the large number of women experiencing abandonment and severe psychosocial issues, coupled with the lack of service to combat these problems; there is an undeniable need for an emergency short-term rehabilitation center. The need can be further expanded, as beneficiaries will require a place to stay and eat, counseling and skill development.

Through this project, KOSHISH will address the need of women experiencing psychosocial issues related to GBV, by rescuing people them from vulnerable situations: abandoned in the streets, locked up, chained. Simultaneously addressing the need for room and board, counseling, medication and skill development. Room and board will provide both a safe residency and nutritious food, for beneficiaries during their recovery from psychosocial issues. While living at the emergency short-term rehabilitation center, counseling coupled with medication will be provided, this will promote a healthy mind and work towards reintegration and rehabilitation of women. Finally, skill development will solve the need of feeling independent, and the confidence to be reintegrated back into the community with a purpose.

Our goal is to support women experiencing psychosocial issues related to GBV, by rescuing them from vulnerable situations and supply them with a safe environment for recovery. Thereafter, the women will be reintegrated back into their communities with the skills and mindset to live healthy and productive lives.