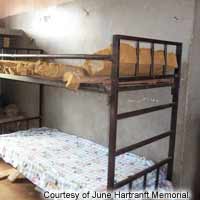 Birthed in 1968, by the Sierra Leone UMC Annual Conference and alumni of the Harford Secondary School for Girls, this school represents the fulfillment of a dream of June Hartranft, a beloved Evangelical United Brethren missionary from Ephrata, Pennsylvania, principal, and teacher at the Harford Secondary School for Girls in remote Moyamba, Sierra Leone. This primary school now serves as a vital feeder school, providing basic academic instruction and critical life skills within a loving Christian environment. This United Methodist Church school has students ages 6 to 11 or 12 years old. It is a boarding school that draws children from Moyamba and other extremely remote villages and is spoken of with high esteem within the Sierra Leone UM Conference and the country of Sierra Leone, West Africa. When the recent Civil War invaded the Moyamba District, as rebels attacked and looted the school in 1995, school staff grabbed students, hid in the bushes, and ultimately fled to Freetown and perceived safety. Due to the fierce dedication of the Headmistress, Jane Lahai, and surviving staff, a dilapidated garage was quickly transformed into a crude schoolhouse and word was spread throughput Freetown that education and hope prevailed even in the midst of a Civil War and death. When the rebels moved north into Freetown and attacked this school location in 1996, the school staff chose to return to Moyamba and reclaim, rebuild and restore the school. They were greeted with the devastating news of the death of many students’ parents and family members and burned out homes. Poverty unlike any seen before prevailed. The school has been rebuilt despite its impoverished surroundings and the visible scars still healing in the aftermath of the Civil War. Total student enrollment of 478 students includes 70 boarding students and 408 commuters. These commuters walk miles through rugged bush each day from their remote villages to attend school. Teachers and staff receive little if any pay. While the tuition of the boarding school students and resourceful management of the school in the midst of scarcity results in 3 daily meals for all boarding students, the commuters receive only a meager lunch on Mondays and Fridays (funds received to honor the legacy of June Hartranft, once a member of the community of First UMC, Ephrata, Pennsylvania – the other school days they go hungry, resulting in malnutrition, lethargy in the classrooms and sub-standard performance in their academics. First UMC, Ephrata, Pennsylvania gifted funds for the construction of outhouses and the purchase of a generator, the only source of electricity for the School/Moyamba community. More partners are needed to assist the School in the aftermath of the destruction of the school grounds during the Civil War, its inadequate daily feeding program for non-boarding students, lack of educational resources (text and library books, basic school supplies), stark classrooms, need for solar panels to power computer labs and a mini-bus. Girls generally are under-privileged in rural Sierra Leone and hence mostly deprived of educational opportunities.