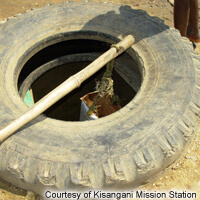 Improving facilities that house a healthcare facility, schools, church and orphanage at the mission

Prior to the establishment of this mission station most of the Congolese were victims of cruel, and harsh labor practices. With few resources for refuge, healing, safety, and education. The mission station at Kisangani was, and still is, one of the largest refugee centers for Congolese fleeing Eastern Congo. During the 20 years of the Congo Civil war, the city was virtually leveled. Millions of Congolese lost their homes and businesses. Many churches were destroyed as well. Rebuilding the mission station is critical so it can bring back the services it once rendered, to thousands of people in the condition described above. The church seeks to minister to the immediate community and those from far away places for their very survival and opportunity for improved living

The project will assist us with rehabilitating the health facilities, orphanages, and the schools will also be constructed.

Improvement of the well being of the population.