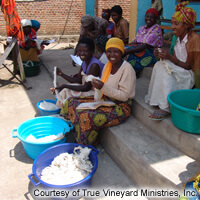 During the 1994 Genocide, women were gang raped by HIV+ militia in an attempt to infect their victims with HIV/AIDS. As a result of the 1994 Genocide, subsequent civil conflict and HIV/AIDS more than 600,000 widows are currently living in Rwanda. Women head 34% of all households and more than 50% of the population is under the age of 18. More than 67% of the women raped during the 1994 Genocide are now facing death from AIDS. Those who are infected with HIV/AIDS are unable to take the antiretroviral medications (provided at no charge by the Rwandan government), because one must eat consistently healthy meals simultaneously; otherwise, the medicine accelerates the symptoms of their illness. Without regular employment, women who have been made marginalized from HIV are struggling to have enough food, and also provide for their large families. There is no assistance for women, especially those living with HIV/AIDS, in Musanze, Rwanda. As a result of Rwanda closing all orphanages in 2014/2015, families have become increasingly larger. Orphaned children are forced to live with any living relative, making the task of caring larger families much more challenging, given that there are very few opportunities for regular employment. Public education costs roughly $75 per year (per child), as one must purchase uniforms and school materials. This is a daunting amount when there are multiple children within a family. Most people are living on less than $2 per day. In order for the cycle of poverty to stop for these women and for future generations, the children must get their education, and their mothers must have a regular income. Because of decades of ethnic-based violence in Rwanda, including genocide and other civil conflict, individual trauma counseling is greatly needed. There are only a few professional counselors in Musanze, Rwanda which is a district of approximately 370,000 people.

Now that we have additional space in our new workplace, it is the desire of True Vineyard to expand our program by offering this life-saving employment to additional widows and marginalized women. Beginning in May 2016, our plan is to begin steadily hiring more women. Based on funding, our goal is to increase the current number of women employed from 44 to a total of 65 by the end of the year. True Vineyard will continue all of our current program support but will focus on encouraging the existing women (who qualify) to consider business loans from the micro-finance program. This will enable our women to have greater opportunities for establishing individual businesses and help them plan for their future. This process will keep more women moving through our program, thus largely impacting the community as a whole. To accomplish this, we will offer ongoing financial training on the importance of individual financial savings. This training (in part) will be conducted by our local banking partners. Additionally, we intend to have guest teachers from the local college help train the women in the area of needed business skills so the women will be equipped to manage their businesses for maximum profits.

The primary goal of the project is to give life-saving employment to widows and marginalized women so they can care for their large families. Through employment with True Vineyard Ministries, these women can find healing through counseling and learn business skills needed to run their own businesses, via a micro-finance loan. This long term goal will help them plan, and save for the future become independent from True Vineyard. Simultaneously, is critical that the school-aged children receive their education so the cycle of poverty can be halted for future generations.

True Vineyard Ministries knows from experience that when impoverished women are empowered through life-saving employment, it changes her life, the lives of her children, and her community. Now that we have relocated to our new building in Susa village, we would like to see more women employed, so a broader impact is felt within the Susa community. The results we hope to realized are reduced unemployment, physically, and mentally healthier families, entrepreneurial opportunities and a higher percentage of educated children. By continuing to employ widows and marginalized women from the community, we will realize multiple lives transformed through regular income and healthcare. For women who are HIV-positive, regular antiretroviral treatments will be a reality because of the access to consistent meals. This treatment will allow them to live fuller and more productive lives. Employment through True Vineyard Ministries will also ensure these women receive much-needed trauma counseling. Benefits of employment through True Vineyard Ministries include training in the area of basic business skills and personal financial savings. Employment also allows more marginalized women access to small business loans. As a result, more individuals will be employed long term. Educating the children of our employees will ensure greater opportunities for future employment, resulting in a more educated community and the cycle of poverty halted for future generations.