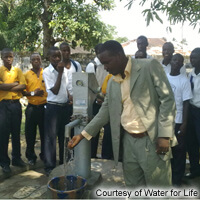 Clean and safe drinking water and sanitation are human rights issues that need urgent attention in post-war Liberia. No one knows the value of safe drinking water, and sanitation more than the people of Liberia. In 1990, Liberia’s 127 years of peaceful democracy was shattered when a senseless civil unrest erupted. Over 200,000 people were killed. People started a desperate search for water, which continues today. Few wells still exist, but most are contaminated, broken, or overused. Many villagers are forced to drink water from stagnant, bacteria-infested rivers, ponds and swamps and defecate in bushes, rivers, and creeks, the open, etc. As a result, water-borne diseases (dysentery, cholera, infectious hepatitis), are common. About 75% of Liberians do not have access to safe drinking water and sanitation facilities. Most residents are drinking from unsafe sources of water and do not have access to standard toilets facilities (Sanitation). Rural towns and villages are usually built along the banks of rivers, creeks, and tributaries. Therefore, what contamination that occurs in one portion affects the other. A classic example: an 18-year-old boy, an epileptic patient, was drowned in the only source of drinking water for a local village comprised of over 300 inhabitants. Unaware of the incident, the villagers kept drinking from the river, but later discovered the decomposed body of the man four days later. Prior to the discovery, an outbreak of diarrhea and running stomach had affected the village, leaving many children seriously ill. This resulted into the death of a child and the hospitalization of an elderly man. The intervention of the United Methodist Church brought a sigh of relief to the village when a well was constructed in collaboration with the Bassa Concern Citizens Movement, a local community-based organizations within the area. Malaria, diarrhea, and respiratory illnesses like pneumonia are the leading causes of death here. In addition, one major contributing factor is the very limited access to clean and safe drinking water and sanitation facilities. Most people have no choice but to defecate in the open, where both their lives and dignity, together with the health of others are at risk. These situations and numerous related life-threatening issues prompted the Human Rights Monitor, the Peace with Justice Program of the Liberia United Methodist Church, to develop the Water for Life initiative in 2008. Its mission is to rescue communities and residents from poor living conditions by constructing wells. This initiative provided and still provides safe drinking water to over 98,000 people who benefited during the 2008-2012, quadrennium. This initiative calls for a robust and proactive engagement, and a mobilization of resources for the construction of the facilities, which will ensure that God’s people are rescued from poor living conditions, and their dignity and hope restored.

The Water for Life project is a grassroots initiative and seeks to address the water and sanitation needs of the affected communities through the following means: Seek resources (funding) for the construction of 40 wells and 30 toilet facilities within communities and schools . Those communities include: Bong, Maryland, Grand Bassa, and Gbapolu Counties. 2. Set up community structures and leadership that will supervise and coordinate the wells and toilets. 3. Strengthen existing community structures and leadership for the supervision and proper management of the facilities. 4. Mobilize, train, and educate the various communities on water and sanitation and other developmental initiatives. 5. Promote the rights to access clean and safe drinking water, good sanitation facilities, health, and development at the grass-roots level in post-war Liberia.

Seek resources (funding) for the construction of wells/hand pumps and toilet facilities within communities. Other long term impact includes: Set up community structures and leadership that will supervise and coordinate the wells and toilets. Strengthen existing community structures, and leadership for the supervision and proper management of the facilities. Mobilizing, training, and educating the various communities on water and sanitation and other developmental initiatives. Promoting the rights to access clean and safe drinking water, and good sanitation facilities, health, and development at the grassroots level in post-war Liberia.

Some of the major changes that the project hope to make are: Community members, especially women and children will not have to walk long distances to fetch for water. The health of the beneficiaries will improve to some considerable extent. The availability of proper, and modern toilet facilities will stop the defecation into rivers and the bushes. The project will also promote peace, unity and community development.