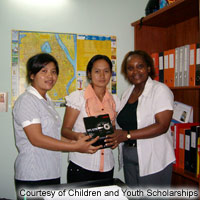 Awarding scholarships to children and youth enabling them to improve their quality of life.

Thirty five years ago, Cambodia emerged from a brutal regime that resulted in complete destruction of schools. Since then, rebuilding the country’s educational system has been a top priority, and considerable improvements have been made. However, despite these efforts, Cambodia’s education sector remains blemished by limited access to quality instruction, inadequate school facilities, and high dropout rates. Access to and completion of primary school, in particular, remain a pressing dilemma, as poverty and opportunity costs channel many children away from school, with many children as young as 12 years old entering the labor market. Most families in Cambodia depend on agriculture for their livehoods and wages are low. Children and youth are often needed to help during the harvest and planting season and are frequently kept out of school. While Cambodian children are filling the seats in primary schools, completion rates for primary, and particularly lower secondary education, are low. Poverty pushes many students out of school as many parents, especially in rural areas, cannot afford the direct and indirect costs related to education and families often require children to help at home with chores and field work. Lack of quality education in schools, leading to high rates of repetition, also contributes to high dropout rates, particularly at the primary school level. Repeating grades results in a significant proportion of overage children in primary schools, preventing children from reaching the transition to secondary school at an age where it still makes sense to continue in education. Challenges multiply for children in rural and remote regions, especially those from ethnic minorities, who lack access to consistent, quality education. In the 2013/2014 school year, nearly half of children in remote areas admitted to grade one were over the age of six, compared to 29 per cent in urban areas. Meanwhile, preschool and other early education opportunities remain largely out of reach for most children, especially those outside of urban centers.

GBGM/UMC will provide education opportunities for youth and children to attain high school, and college education especially those from rural villages of Cambodia. The church is doing its part in providing scholarships for the poorest of the poor to get education especially from the rural areas. We believe that by providing a child with a high quality of education, they will be able to lift themselves and their families out of poverty.

Our church primary objective is to reach out to children young people in our churches by providing an education opportunity. We believe that by providing a child or a youth with a high quality education, they will be able to lift themselves and their families out of poverty thus breaking the cycle of poverty. We believe that through education, we can create a lasting change in the most impoverished communities.

We want our scholars to graduate high school, university or vocational training with skills they need to secure gainful employment. We also want them to be passionate young leaders that care for environment, their communities and their country.