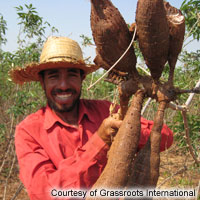 Brazil’s northeast region faces significant historical and present day challenges to social and economic justice and food sovereignty. The dry semi-arid region in the northeast has some of the highest rate of unequal land distribution in Brazil. The region also has some of the highest rates of social inequality in the country, and in some cases, farm workers toil in near-slavery conditions, watched over by the landlords’ hired gunmen. These inequities have been exacerbated by government policies that have favored investments in accelerated macro-economic growth, through megaprojects and agribusiness for export, while neglecting basic public services such as sanitation, health, education, and public transportation in both rural and urban areas. Other rural communities have been dislocated by challenges associated with climate change, including increasingly prolonged draughts and intense floods. In the countryside, the government’s consolidation of a rural development model that favors agribusiness and megaprojects (mainly private) comes at the expense of peasant family farming. This model is based on destructive exploitation of natural and human resources, subjecting thousands of families to precarious situations and extreme poverty. Some of Latin America’s most impoverished rural areas are located in northeastern Brazil. The states of Pernambuco and Maranhão have the continent’s highest rates of chronic hunger, poverty, malnutrition, and illiteracy. For example, in 2000 the Northeast region of Brazil experienced an infant mortality rate of 64.25 (per 1000 live births), much higher than the nation’s rate of 34.08. Twenty million (nearly 15 percent) of Latin America’s poorest people are concentrated there. 1. People in the Northeast state of Pernambuco live 4-6 years less than the average Brazilian. The gap between rich and poor is dramatic.

Many of the formerly landless farmers participating in this program have personally experienced the brutal realities of working in sugar cane fields, teeming with toxic chemicals and engaged in hour after hour of back-breaking labor. Many have also experienced the destitution of homelessness, seasonal farm work and hunger. From these communities which are so close to the problems of industrial agriculture* and economic disparity, come bold plans for an alternative life and farming approach—agroecology—to transform farm and livelihood practices in ways that are much healthier for farming communities and the environment. (*Among industrial agriculture’s negatives is that it diminishes biodiversity and promotes indebtedness of farmers as they become tied to GMOs seeds, expensive fertilizers and pesticides. Industrial agriculture methods are also frequently toxic or harmful to not only the environment, but to the farmers and their family members who are exposed to them on an extended and intensive basis.

The program seeks to 1) strengthen rural livelihoods throughout Brazil while offering a viable alternative to the damages of industrial agriculture; and 2) promote sustainable and healthy agroecological farming practices to formerly landless farmers in the northeastern state of either Maranhão or Pernambuco. The program will impact leadership capacity and strengthen communities (in terms of healthy, productive farming practices) and the environment (by avoiding toxic chemicals that deplete the soil and contribute to climate change). Versus the dominant industrial model of agriculture, this project promotes and disseminates a sustainable alternative: agroecology, which emphasizes locally controlled methodologies that sustain the environment, biodiversity and traditional livelihoods.

– Increased practice of agroecology (AE) in Brazilian land reform settlements. – Participants’ well-being improved; women’s roles and status enhanced. – The project becomes well accepted among families because of its low cost and effectiveness. – The i