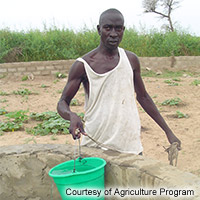 Assisting farmers in improving yield and to become economically self-sufficient.

Many refugees were returning to the Dakar area from Mauritania and Tambacounda in search of jobs and a better way of life. The agriculture training program was established to help reintegrate the refugees into the community, and provide a means of long term sustenance. This project expanded when training was provided for city people in Dakar area on how to grow vegetables in rooftop gardens. The government of Senegal was sufficiently impressed with this project that they copied it, and started an identical program in Dakar. This resulted in the local people opting for a government sponsored program (no fees) rather than the United Methodist Church (UMC) program. The project was then expanded further into the villages and began assisting smallholder farmers and local UMC leaders. In Senegal, smallholder farmers face several challenges when it comes to establish new crops. These include a limited access to quality seeds. Communities in rural areas do not have access to certified seeds of crops, which played an important role in the staple food of the Senegalese community such as: rice and millet. The lack of seeds of staple food has forced farmers in rural areas to go for monoculture (peanut) which result in soil degradation. The production of vegetables such as: onions, peppers, okra and eggplant, is the main source of income for rural communities. The UMC Agriculture program has been teaching both village women and men to grow sustainably some of vegetables and cereal crops for home consumption and for sale. Also the program has started some vegetable production and pig projects for local UMC, which will help as source of income to supplement to the church budget. In Senegal, small-scale farmers can’t borrow from banks because they don’t have collateral to offer as insurance. They rely on informal credit reimbursement, which is very costly because they must repay what they borrow at very high interest rates. A pragmatic way to alleviate poverty in rural areas is to grant loans to small-scale farmers. The UMC Agriculture program grants some loans to both village communities, and local church leadership which will help as seed money for a start.

The project has been addressing this need by gathering farmers into groups based on closeness of villages, and teaches them about sustainable agriculture. Also to set a demonstration plot for practices and granting them some loan, which is very important for them to get started. Many local farmers still need some assistance, technically and financially. Thus, the project really needs to grow by having enough resources which will enable it to assist as many needy farmers.

To improve the yield of small scale village farmers and establish agricultural projects for local United Methodist Churches which will be generating some funds to enable these local churches to be self-sufficient.