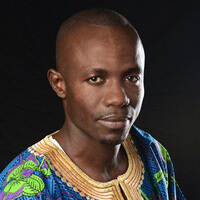 David Makobo N’Shikala is a missionary with the General Board of Global Ministries of The United Methodist Church serving as an agriculturalist with the Senegal United Methodist Mission, based in Dakar. He was commissioned in October 2013.

His work in Senegal involves assistance to farmers in making their labor and the land more productive. Senegal is a small country on the west coast of Africa. It lacks significant natural resources but is adaptable to the cultivation of millet and peanuts and the raising of livestock. The Senegal United Methodist Mission dates to 1989 and has some 19 congregations. Membership has grown steadily in the predominantly Muslim country.

David is a native of the Democratic Republic of Congo (DRC) and is a member of the Jerusalem Francophone Church in Lubumbashi in the South Congo Annual Conference. He was born at Mwajinga, a United Methodist mission where his parents have been teachers for more than 40 years. His elementary and secondary education was accomplished at Mwajinga, as was his early leadership training in the church. David received a Bachelor of Science degree in horticulture and a Master of Science degree in crop production from Africa University, a United Methodist institution, in Mutare, Zimbabwe. In 2010, he became the founding dean of the School of Agriculture at Katanga Methodist University in the DRC.

In Senegal, he teaches farmers how to “grow food in poor soil and how to use modern technologies to produce more.” He also works with church leaders to assist the mission in realizing its goal of becoming economically self-sufficient through the use of modern agricultural tools and methods. He also works with visiting Volunteer-in-Mission teams.

He has wide experience in The United Methodist Church on the local and connectional levels. He served as evangelist and spiritual leader of the praise band in the Jerusalem Francophone Church. He has received special training as an evangelist. At Africa University, he served on the chapel team and served as a French-English translator at local and international church events, including the Global Young People Convocation in South Africa.

David says that his dream is to help his fellow Africans through agriculture to become empowered and ward off poverty. “People in the rural areas are the most impoverished,” he says, “because access to education and other self-improvement opportunities” is lacking. He wants to expand those opportunities.

David is married to Solange Makobo.