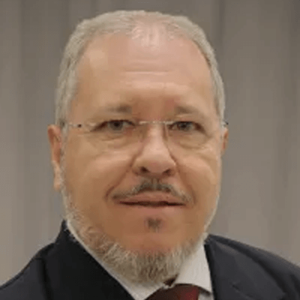 Serving At: Methodist Church in Uruguay
Home Country: Brazil
WAYS TO REACH ME:
Email Me

The Rev. Dr. Luis de Souza Cardoso is a United Methodist missionary with the General Board of Global Ministries, serving as coordinator of lay pastoral team and as a chaplain at the Crandon Salto School, with the Methodist Church in Uruguay.

Congregational and missionary growth are challenges along the coast of the Uruguay River, on both Argentine and Uruguayan shores. The Argentine Evangelical Methodist Church and the Methodist Church in Uruguay cannot feasibly address these issues unless they collaborate. The strategy is to develop lay teams trained for mission and pastoral vocations.

Luis is the third generation of a Methodist family in southern Brazil. “I spent my childhood, adolescence and youth deeply involved in my local church, district and conference,” he recalled. He led youth and young adult groups, served in Sunday school and sang in the church choir.

“I learned early to cultivate a spirituality centered on Bible reading, meditation and prayer, but also deeply involved with the challenges and needs of my neighbors, the community and society,” he said. He described it as “a Wesleyan spirituality with personal piety and mercy with others.”

God was nudging the teenage Luis toward pastoral ministry, but the young man first embarked on studies in political and economic sciences.

In October 1980, during a regional youth meeting, the Rev. Orvandil Moreira Barbosa invited those who felt the call of God in their lives to take a step toward of the altar. “I just went,” Luis said.

In 1984, he entered the university to study political and economic science. “In 1986,” he said, “I finally decided to drop that course and go to seminary. I realized that I must answer God’s call and prepare myself to collaborate more deeply in God’s mission as a pastor. In 1987, I entered the seminary.”

“I had the opportunity to find the paths of Wesleyan theology and to establish a very productive dialogue with the Latin American and the liberation theology,” he said. He was elected for a semester international internship at the Evangelical High Institute of Theological Studies in Buenos Aires, Argentina, recognized among the best schools of theology in Latin América at the time.

In 1990, Luis completed his degree in theology and returned to his conference in southern Brazil. His first appointment was with two local churches and a chaplaincy at the “Union” Methodist School in Uruguaiana, RS, on the border with Argentina and Uruguay. In 1994, he was ordained an elder by the Second Ecclesiastical Region (conference) of the Methodist Church in Brazil.

“For the past 30 years,” he said, “I have served the Methodist Church in Brazil and Latin America.” For him, one focus area is Methodist education. Luis has served at the Methodist University in Piracicaba and at the General Council of Methodist Institutions of Education in Brazil.

“These experiences in my faith and pastoral journey,” he said, “have brought me to meet many cultures and different peoples in Latin America and the Caribbean, when I have been serving with the Latin American Association of Methodist Educational Institutions (ALAIME) and with The Global Methodist Education Fund for Leadership Development of the United Methodist Board of Higher Education and Ministry.”

He is excited about his new role with the Methodist Church in Uruguay.

“I have been so grateful to God for every opportunity to serve in his mission,” Luis said. “Everything I learned in this journey I owe to God’s grace and mercy. All I can do is very little in the face of God’s immense and amazing love.”

Luis also completed postgraduate studies, a master’s in science of religion (theology and history) and a doctorate (Ph. D.) in education (politics and management). He is married to nurse Astrid Dorvani Cardoso, and he is the father of Pedro.