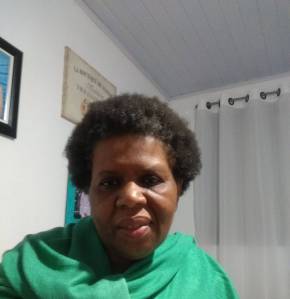 Serving At: The Methodist Church in Italy
Home Country: Brazil
WAYS TO REACH ME:
Email Me

The Rev. Eliad Dias dos Santos is a United Methodist missionary with the General Board of Global Ministries, serving in ministry to the poor through the Methodist Church in Italy.

In recent years, Italy has experienced an economic crisis that has increased the number of people living in poverty. As unemployment rises, more families seek support from groups that offer free meals or damaged food packaging. The intention of this ministry is to carry out existing projects of the Methodist Church in Rome related to migration and poverty, sharing God’s love with the homeless and other marginalized people.

As a child, Eliad dreamed of becoming a radio announcer. She was ready to sign up for college radio and TV classes, but God led her in another direction. Introduced to the book “Theology of Captivity and Liberation,” Eliad decided to study theology and become a pastor. She holds master’s and bachelor’s degrees in theology and history from the Methodist University of São Bernardo do Campo in São Paulo.

Ordained in 1990, Eliad served as a pastor in churches in the city of São Paulo. In 2019, she returned as a pastor to the church in which she grew up – the Methodist Church of Light, in São Paulo. She participated in international training on conflict resolution, mediation and human rights protection in Wuppertal, Germany.

“I got to know a distant reality,” she said, “of people who lived in rooms, in a big house, whole families, shared a single bathroom in the house, and lived unworthily.

“But it was working with women prostitutes at the Luz station,” she recalled, “that I really converted. I promised God that I would work for people the church doesn’t normally take in: prostitutes, street people, transgender people.”

Eliad added, “Since then, I have worked together with people who believe that Jesus continues to walk with his people and with the excluded. As Christians, we are the presence of God in these people’s lives, not only helping them materially, but [also] mainly fighting for a more just and fraternal world, because God’s will always has been for us.”

Before starting her missionary assignment in Italy, Eliad coordinated a project for migrant women and children.

“I am so grateful to God for all the opportunities offered,” she said.

Describing her mission call, Eliad said, “I don’t worry about what might happen a few years from now. God, who ruled the world before I was born, will take care of me equally even when I die. My part is to improve the present moment and collaborate for a better future for all people.

“I don’t settle for this century, but I try to transform it – as a Methodist, as a woman, as a black woman. I believe the mission of the Methodist people is to be light and salt in this world.”

She eagerly awaits her mission. “I’m going to a country I’ve never seen,” said Eliad. “I know I have huge challenges ahead, but trust in God is much greater. I am blessed and believe that many blessings await us.”