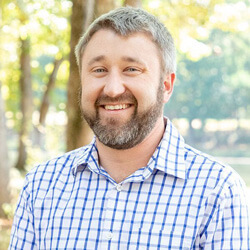 Nicholas (Nick) Shaw is a missionary with the United Methodist General Board of Global Ministries, serving as Church Developer at The UMC, Southern Congo Episcopal Area. He was commissioned October 13, 2018 along with his wife Renee, also a missionary in Zambia.

Nick is from the West Ohio Annual Conference where he is a licensed local pastor. At the time he entered service, Nick was serving as pastor of a two-point United Methodist charge—Good Shepherd in Circleville and Fairview in Stoutsville. Earlier, he was the pastor at Christian Endeavor United Methodist Church in Newark, Ohio. Nick holds a bachelor’s degree in Computer Science from Miami University, Oxford, Ohio, and a Master of Divinity degree from Methodist Theological School in Ohio, Delaware. He worked for over 12 years as a software developer.

Nick does not come from a family that attends church. Yet as a teenager, he began attending with a friend at a small rural United Methodist church with a warm welcoming congregation and thriving youth group. Nick was actively involved in the church during high school years, but not much during college and the years immediately following. He and Renee found a home in First United Methodist Church in Newark after they moved to Ohio.

It was a Walk to Emmaus retreat that renewed Nick’s desire for Christian service. Within a couple of years he enrolled in seminary and qualified as a licensed local pastor, serving in three different churches, an experience of deep meaning to him.
Nick and Renee began to consider the possibility of global service: “I have always been fascinated by the worldwide nature of The United Methodist Church.”

“My call to mission centers around Jesus’ promise that ‘whoever loses their life for me will save it.’ It is my desire, and call, that we—my family and I–give up the comforts of our lives to live by the hand of God and be solely focused on being the hands and feet of Christ.”
Nick and Renee have four young children, Harrison, born in 2008; Porter, 2010; Simon, 2013, and Corbin, 2014.