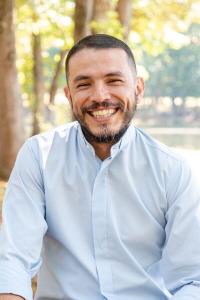 Oscar Quevedo a missionary with the United Methodist General Board of Global Ministries, serving in a joint mission district of the Argentinean Evangelical Methodist Church and the Methodist Church in Uruguay. This district runs along the Uruguay River, which acts a border between the two countries. Oscar was commissioned inOctober 13, 2018.

One objective of the new district is to equip lay pastoral teams to respond to the ministry needs of communities in this vast area that has few ordained clergy on either side of the river. Oscar is one of three Global Ministries missionaries working with the project. He is based in Colon, Argentina.
Oscar is from Bogota, Colombia where he was pastor of the Prince of Peace Church of the Colombian Methodist Church for seven years. He holds a degree in theology from the San Alfonso University Foundation in Bogota. Oscar has worked in the nonprofit sector, including two years with Compassion International, a child welfare organization.

Born into a Roman Catholic family, Oscar became a Protestant—initially a Presbyterian—at age 13. Since then, he says, “I have been actively involved in ministries such as youth, music, training, writing and pastoring.” From the beginning, mission was “deep in his heart” and he is thankful that the possibility of missionary service became available to him.