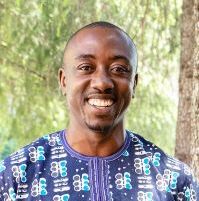 Serving At: East Congo Episcopal Area in the Democratic Republic of Congo
Home Country: Cameroon, Africa
WAYS TO REACH ME:
Email Me

The Rev. Collins Etchi Ako is a missionary with the General Board of Global Ministries of The United Methodist Church providing administrative and liaison support in the East Congo Episcopal Area in the Democratic Republic of Congo. He was commissioned in 2018.

Collins is from Cameroon and is a provisional elder of the Cameroon Mission of The United Methodist Church. The Mission is expected to become a provisional annual conference in 2020, having begun more than 20 years ago as a Mission Initiative of Global Ministries. He has served pastoral appointments in his home country and also worked with many aspects of the mission, which is under the episcopal oversight of the bishop in Côte d’Ivoire.

Collin has also been deeply involved in the denomination’s Young People’s Ministries, related to Discipleship Ministries. Locally, he has most recently worked as coordinator of mission volunteers for the Cameroon Mission and as an associate pastor with Blessing United Methodist Church, Simbock, Yaounde.

Born into a Presbyterian family and orphaned at an early age, Collins became a United Methodist in 2001 and began working closely with the Cameroon Mission in 2007. Missionary service has been on his spiritual radar since that time. He has special interest in ministries of justice and reconciliation. He has traveled widely, conducting seminars on conflict management, peace, sustainable development, and interfaith dialogue.

Collins is married to Nkondock Mbondy Anne Greta and the couple have four children.