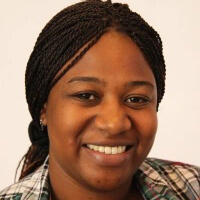 Serving At: North Katanga Episcopal Area in the Democratic Republic of Congo, based in Lubumbashi
Home Country: Zimbabwe, Africa
WAYS TO REACH ME:
Email Me

Lorraine Charinda is a missionary with the United Methodist General Board of Global Ministries serving as an Agricultural Rural Economic Development specialist in the North Katanga Episcopal Area in the Democratic Republic of Congo, based in Lubumbashi. She was commissioned in October 2017.

North Katanga forms one of the largest episcopal areas in The United Methodist Church and it is one of the poorest. Most of the people depend on small-scale farming to earn a living and the church is committed to maximizing agricultural productivity. Farming serves as a tool for both evangelism and economic development. Projects include several farms that grow a wide range of crops, plus projects in beekeeping, fishing, and moringa tree cultivation.

Lorraine is from Zimbabwe, but has recently lived in Windhoek, Namibia, where she studied, worked, and was involved in Celebration Church- Zimbabwe. She holds a Bachelor of Science degree in agriculture and natural resources from Africa University in Zimbabwe, and a Master of Science degree in agricultural economics from the University of Namibia. In Windhoek, Lorraine worked in industry and education.

Raised in a religious family, Lorraine became a “just attends church” Christian as a teenager, until a visiting pastor shared her personal testimony with Lorraine. Her life changed as she received God’s forgiveness and grace. “I began to experience joy and purpose in life, and on top of that, God gave me peace I had never experienced before I became a true Christian.”

Lorraine’s call to mission involved the experience of being partnered with an effective volunteer evangelist in a mission campaign. “She had a kind of serenity and certainty about her that I always admired. When I heard her minister to people we met in hospitals with a fiery passion and compassion, not only did it encourage me to want to do more, but it also gave me the courage and strength to serve.”

She volunteered to teach in a church academy for children and adults who are unable to pay for mainstream schools, “That’s when my zeal for missionary work increased. It brings me joy to know that my academic achievements can help others.”