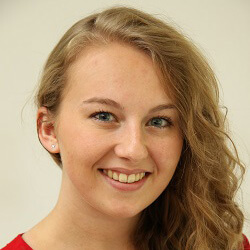 Serving At: Center for Social Communication in Latin America
Home Country: United States of America
WAYS TO REACH ME:
Email Me

Hannah Reasoner is a United Methodist missionary with the General Board of Global Ministries serving as the assistant for partnerships and network development for the Latin American Ecumenical Center for Inclusive Communication (CEPALC). She is based in Bogota, Colombia.

With a lifelong passion for communications, Ms. Reasoner anticipated a career in professional writing in the public sector. But after a stint as a Global Mission Fellow, she could not ignore the pull back to mission service. She felt called to share the stories of how God is working in grassroots communities in South America and to help create a platform to champion the voices of those who speak for justice. She understands the Colombian context well and has already begun working with many organizations who partner in communication initiatives.

Colombia has significant inequality between the incomes of the rich and the poor. The richest 10% receive 56% of the income, while the poorest 10% must be content with less than 1%. Seventy-five percent of those formally employed earn less than USD $300 monthly. Thirty-eight percent of the Colombian population lacks access to health services. The school system is so limited that it cannot provide placements for close to 2.5 million children and youth, and more than 55% of guerrilla and paramilitary group members are younger than 18.

In 1978, CEPALC began working with impoverished groups in order to increase their capacity to use communication platforms effectively. Communication mediums are valuable tools for excluded social groups to fight for their interests, assert their rights and participate fully in their communities. Over the years, CEPALC developed and implemented new training programs in addition to strengthening existing efforts. CEPALC has also resourced the ecumenical community and Methodist churches in particular, both within and beyond Colombia ´s borders.

In her new role, Ms. Reasoner is focusing on developing partnerships and networks to further disseminate the story of the people with whom CEPALC works.

“I grew up with an inclusive church community that taught me from the very beginning how to put love into action,” Ms. Reasoner said. “I believe that social justice and faith-based work can be deeply connected as Jesus showed us how to be in solidarity with and lift up the people that have been marginalized in society. I believe that God’s light shines in every person regardless of race, gender, sexual orientation, religion, class or social status. Working toward a more inclusive and equal world is the only way I know how to be a Christian.”

Born in New Jersey, Ms. Reasoner earned a Bachelor of Arts degree from Ramapo College of New Jersey, Mahwah, in 2017. She majored in communication arts, with a writing concentration, and minored in music and human rights/genocide studies.

“After graduating college,” Ms. Reasoner said, “I joined the Global Mission Fellows program and served in Colombia for two years (2017-19) with Central Popular para American Latina de Comunicacion. During that time, I learned how to use all of my experience and passions in music, radio, art, theater and literature in a way that could teach and empower women and girls. I saw the ways that CPALC opened spaces to lift up the voices of women and young people in a world that often tries to silence them.

“And now, again, I feel God pushing me to continue my journey as a missionary to use my knowledge, passion and experience to continue working alongside this community to build a more just and inclusive society.”