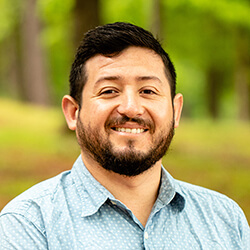 Cristian Schlick is a missionary representing the United Methodist General Board of Global Ministries in ministries with migrants from Central America and Mexico. He was commissioned in June 2019 and is based in Central America.

Global Ministries engages in ministries with migrants in Central America and Mexico in collaboration with partner churches and organizations. Having a missionary in the region facilitates ministries aimed at assuring a range of options, including “the right to stay,” “safe passage,” “hospitality,” and “support for the returned.”

Cristian was a United Methodist Global Mission Fellow for two years in Central America before becoming a global migration missionary. As a mission fellow, he worked on human rights related issues in the region, did original research and took part in international consultations on regional migration issues.

He is from Iquique in Tapacá State, Chile, where he is a member of the Second Methodist Church of Iquique, a congregation of the Methodist Church of Chile. He holds a degree in law from the University Arturo Prat and has worked in the legal profession at local and international levels.

Raised in a Catholic/Protestant home and with friends and classmates from a wide range of faiths and cultures, Cristian developed an appreciation for diversity while affirming his Christian commitment. He came to Methodism as a young person attending a church-related school in Iquique, and was given increasing responsibility within the Methodist Church of Chile in his university years. In 2016, he began the process toward the ordained ministry and served as assistant pastor of a small neighborhood congregation.

Cristian’s understanding of mission allows him to combine his experience and training in law with his church work, which includes commitment to community welfare and justice issues. He expects his service as a Global Mission Fellow will foster the combination of law and Christian service.