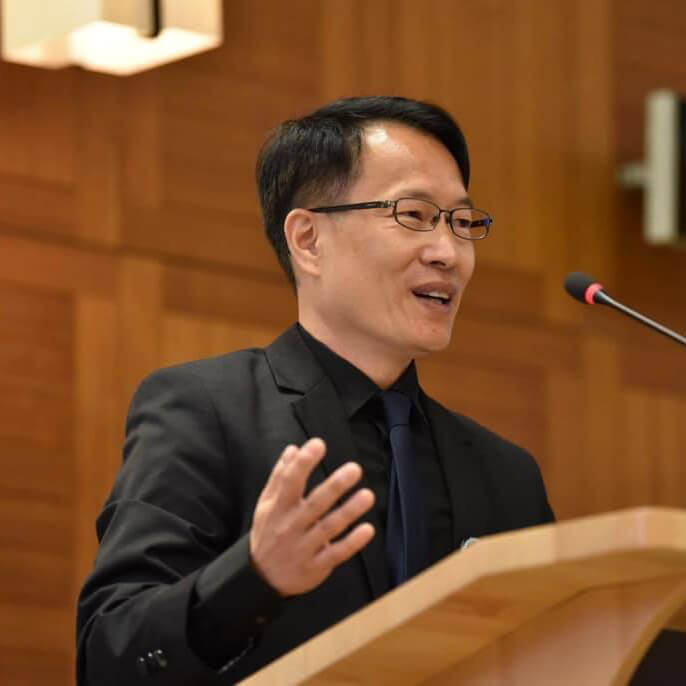 Serving At: World Council of Churches
Home Country: United States of America, North America
WAYS TO REACH ME:
Email Me

The Rev. Dr. Jin Y. Kim is a missionary with the United Methodist General Board of Global Ministries serving as the Coordinator of Pilgrimage of Justice and Peace of the World Council of Churches, based in Geneva, Switzerland. He was commissioned in the Spring of 2017.

At its 10th Assembly in Busan, South Korea, in 2013, the World Council initiated a Pilgrimage of Justice and Peace for the long-divided Korean peninsula. This was given organizational form in 2016. Dr. Kim coordinates a series of pilgrim teams that visit churches in the region to promote justice and peace. Peace and reunification in Korea are long-standing mission goals of The United Methodist Church and its mission agency, Global Ministries.

Dr. Kim is an ordained elder in the Northern Illinois Annual Conference and pastored the Creston/Steward United Methodist Church in Steward, Illinois from late 2011 to mid-2017. He also served as an auxiliary faculty member in Old Testament Studies in the 2016-2017 academic year at the Lutheran School of Theology at Chicago.

He is a native of South Korea, born in Busan, and did his undergraduate college work there at Busan Union Theological Seminary and earned the Master of Divinity degree from Hanshin Graduate Theological School in Seoul. After three years in the Presbyterian pastorate in Korea, he came to the United States to pursue advanced studies in theology and Old Testament. He earned a Master of Art in Theological Studies degree from the McCormick Theological Seminary, Chicago, and Master of Theology and Doctor of Philosophy degrees from the Lutheran School of Theology at Chicago.

His ecumenical background has strongly equipped him for his role at the World Council of Churches and his work in Korea. “I was ordained in a Korean Presbyterian church; I went to a Lutheran seminary, and now I am a Methodist minister,” he says. “The Presbyterian Church in the Republic of Korea has continued to develop a prophetic stance in its understanding of the church and its mission in the Korean society, such as urban ministry, social justice, and reunification of Korea. So, I became interested in the ministry of social justice and peace in Korea.”

Dr. Kim says he was drawn to The United Methodist Church and ordination because of its strong emphasis on mission. “I came to understand,” he says, “that Methodists are nothing but the people of mission.” The second son with two brothers and a sister, Dr. Kim’s family was poor and not Christian in his childhood, except for his mother and himself. He suffered from low self-esteem prior to his baptism into Christ. In baptism, “I heard the good news that God claimed me: ‘You are beloved, you’re precious, and you are worthy.’ “He was also estranged from his father in his youth, but became reconciled before his father’s death and after the father’s own baptism.

“I believe that God has called me to participate in God’s mission beyond the local church through my ecumenical engagement,” Dr. Kim says. “I want to challenge myself by getting out of the comfort zone, and I want to continue to grow in the holiness of heart and life. God will continue to call me to join the healing stream of God’s love, peace and justice.” Dr. Kim is married to the Rev. Kyeong-Ah Woo, also a United Methodist missionary. The couple has a young child, Micah Kim.