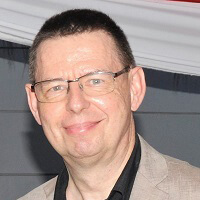 Jean-Paul Dietrich is a missionary with the United Methodist General Board of Global Ministries serving as project coordinator with the South Congo Episcopal Area in the Democratic Republic of the Congo (DRC). He was commissioned in the Spring of 2017.

The South Congo Episcopal Area requires assistance in the coordination of a wide range of mission projects undertaken with partners, such as Global Ministries; Connexio, the mission agency of the United Methodists in France and Switzerland, and various annual conferences in the United States, including the Pacific-Northwest Conference. The episcopal area is one of church growth and potential.

Jean-Paul is a native of Switzerland. He holds a Master of Public Administration degree from Lausanne University and has studied Civilian Peace Building at Basel University.He already has experience in the DRC having worked as Public Information Officer with the United Nations Peacekeeping Mission there in 2008-10. His was involved in media relations and outreach activities. More recently, he was head of finance and administration with the Swiss Agency for Development in the West African country of Mali, another fragile context.

Jean-Paul grew up in a Roman Catholic family and participated enthusiastically in Christian youth groups, intending as a student to study theology. He turned to public management instead and served in several public institutions in Switzerland and other places in Europe, Asia and Africa. Christian values strongly orient his daily life.