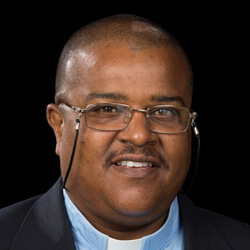 Serving At: Clinical Advisor with the United Methodist Church in the East Angola Annual Conference
Home Country: Latin America and the Caribbean
WAYS TO REACH ME:
Email Me

Leo was ordained by the Methodist Church in Cuba in 2009 and today also holds status as a pastor in the United Methodist East Angola Annual Conference. He and his wife, the Rev. Cleivy Benitez Rivalta, went to Angola in 2011 as missionaries sponsored by the Cuban church in association with the United Methodist Florida Annual Conference. They were the first Cuban Methodist missionaries in Africa. Leo holds a degree in sacred theology from the Methodist Evangelical Seminary in Cuba and also a Doctor of Medicine degree from the Higher Institute of Medical Sciences of Camagüey, Faculty of Medicine of Ciego de Avila, Cuba.

“During these five years of service as a missionary, I have felt that God’s will is being fulfilled in my life,” Leo says. “I have served as professor of biblical and theological studies in the academic trainings for Angolan pastors; I have preached the gospel of God in many regions of the eastern territory of Angola. In addition, I have served as academic director of the theological school since 2011, teaching Bible and other courses toward a bachelor’s degree in theology.

“I served as local pastor of the Central Methodist Church of Quéssua in 2012-2013, and have been privileged to be an advisor to my colleagues in ministry here in Angola. I have also been in charge of the coordination, reception, and care of the mission volunteers who visit the region, groups from the Florida the Yellowstone Annual Conferences,” Leo says.

“Together with my wife, I have participated in campaigns of the United Methodist Church in Angola to eradicate malaria and typhoid fever. I was director of the Methodist Children’s Home in Quéssua from 2011 to 2013, where I have enjoyed the task of being the spiritual father and guardian of many boys with whom I share my love.

“In short, among so many other missionary activities that I do every day, I know that everything I have done, and I do as a missionary, is for God’s name to be glorified through me.”