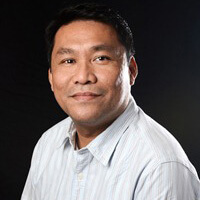 Ronald C. Julian is a missionary with the General Board of Global Ministries of The United Methodist Church serving as a chaplain with the International Seafarers Ministry in Yokohama, Japan. He was commissioned in October 2013.

Yokohama is one of the busiest ports in the world. The Seafarers Ministry there was set up under ecumenical sponsorship in 1983 to provide pastoral care, counseling, and practical assistance to sailors. The chaplain must be non-Japanese because Japanese nationals are not allowed to go on board visiting vessels. Many of the sailors are from the Philippines.

Ronald Julian is Filipino and succeeds two United Methodist missionaries, the Rev. Lamberto and Angelita Valino, who have retired after leading the ministry for 11 years.

While he grew up in a Christian home, Ronald says he became a “searcher” during college years, trying out various religious points of view. He had difficulty settling into a profession after school, until he found his way into a secular company with a Christian orientation and a Bible study every Friday.

The first study he attended was on the parable of the prodigal son in Luke, a passage he remembers from childhood, always identifying with the “good” son who stayed home. “During this session, “he recalls, ”I had this revelation that I am the prodigal son. I am not the son who stayed. I am the lost son and God was calling me back and wants me to come home….And I so spent more time in Bible study until I accepted Jesus Christ as my Lord and Savior.”

Ronald met his wife in church and accompanied her to Japan. The couple has two sons, Matt and Josh.