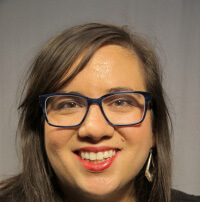 She was also a former Mission Intern missionary (2012-2015), and commissioned as a Global Missionary in June 2017.

Mission Advocates for Young Adult Mission Service promote and interpret missionary service as a vocational choice for young adults, including the Global Mission fellows program that places persons between the ages of 20 and 30 for two-year terms of service in social justice ministries. Global Mission Fellows is part of Generation transformation, a comprehensive approach to young adult mission service. Erica also encourages congregations, districts, and annual conferences to join in covenant support for young adult missionaries.

As a Mission Intern (a forerunner to the Global Mission Fellows Program), Erica was an Outreach Coordinator and English Ministries Program Associate at Youth to Jesus. Youth to Jesus serves the college student population in L’viv, Ukraine. Students engage in worship, service, and English language outreach programs. The student ministry also has an attached church plant. For her domestic assignment, Erica worked as a Team Hosting Coordinator with the South East District of the Florida Annual Conference. She built two ministries of hospitality for mission teams passing through and looking to engage in mission in the South East District. In this position she also worked with the University of Miami Wesley Foundation and was a founding board member of South Florida Justice for Our Neighbors.

Erica is from South Carolina and is a member of St. John’s United Methodist Church in Rock Hill, where she also attended Winthrop University, and studied music education. Her work experience includes 5 years of campus ministry experience, and working in senior living facilities. She says she did not really begin a journey toward God until she was in college. “It was while being part of the Winthrop Wesley Foundation that I developed my personal relationship with Christ and became a member of The United Methodist Church. The past six years of my life have been transformative and I am now so excited to have found the path that God intended for me.”

Erica realized her call to mission “quietly and over time, no burning bushes or prophetic dreams for me. Instead, over many hours of mission trips and service, I started feeling that this might be something I should do as my vocation for the rest of my life. But really, who gets to do that? I come from a low-income, average family, where going to college is a big deal, much less going abroad or moving across the country. Yet still, there it was in the back of my head, this thought that I have been called to engage in mission.

“Over time, I found it was no longer a thought, but it was reality. I worked for a Wesley Foundation and had always had jobs that allowed me to serve people while forming lasting relationships—I was already working in missions. It is so funny to look back and see how God has put me here, opened some doors and closed others, so that I might realize my calling to missions.”