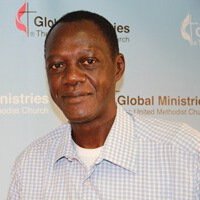 Serving At: Obstetrician Gynecologist for the Methodist Hospital in Dabou
Home Country: DRCongo, Africa
WAYS TO REACH ME:

This missionary has completed service. The Advance number will remain active until December 31, 2020

Pierre Diamba Manya, MD, is a missionary with the United Methodist General Board of Global Ministries currently serving as Obstetrician Gynecologist for the Methodist Hospital in Dabou. He is a gynecologist and surgeon and has been in medical mission since 1984.

Dr. Manya supervises all of the United Methodist-related medical facilities in the area and monitors their compliance with official standards. He serves as liaison with mission partners and the government, and also conceives of new health projects and attempts to get them funded and supplied with equipment and medicine. The goal of all his work is to save and prolong lives. He has been in his current assignment since 2007.

“I perceive my work as a ministry,” he says. “Physical healing was a key part of Jesus’ ministry. He wanted people to be whole and sound in body, mind, and spirit. The Bible tells us in Matthew 9:35 that Jesus traveled around through all the cities and villages, teaching, preaching the good news of the kingdom, and healing people of every sort of illness. So, when I treat people, or do surgery, it is God who helps to heal them. When they are healed, they thank God and sing songs of praise and become followers of Jesus Christ. It is a way of evangelization.”

Dr. Manya was born in Ndju in eastern Kasai Province of the DRC. Following secondary school, he received his Preparatory Certificate in Sciences at Bukavu in 1975. In 1983 he graduated from the University of Kinshasa as a doctor of medicine and surgeon, with a specialty in gynecology and obstetrics.

He became medical director of the Minga Methodist Hospital in 1984, a post he held for a decade, adding the role of head doctor for the Minga Health Zone from 1987 to 1997. From 1994 to 1998, he was head doctor of at Wembo-nyama Hospital and health officer of the Central Congo Annual Conference. Following a leave for additional study, he joined the staff of Yolo Hospital Medical Center and Clinique Kinoise as chief of gynecology-obstetrics, a post he held from 1999 to 2007.

He has served as a lecturer at Wembo-nyama Medical School since 1985.

“Being a physician is a passion for me—to serve my fellow being beings,” says Dr. Manya. “Didn’t Jesus say that ‘the Son of Man did not come to be served, but to serve’? (Matthew 20:28) I am serving my Lord through caring for my neighbor in need.”

Dr. Manya is married to Pauline Ohandjo Manya, a nurse and secondary-school English teacher. They have six children, three boys and three girls.