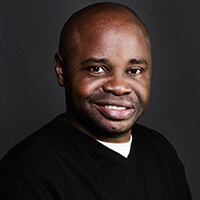 Serving At: Southern Congo Wings of the Morning
Home Country: DRCongo, Africa
WAYS TO REACH ME:
Email Me

This missionary has completed service. The Advance number will remain active until December 31, 2020

Born in Lubumbashi in the Democratic Republic of Congo (DRC), Rukang attended local United Methodist schools and earned a state diploma in chemistry and biology. He worked for Southern Congo Wings of the Morning as aviation mechanic aid and public relationship assistant from 1991 to 1999.

Rukang graduated in 2002 from Moody Aviation, then in Elizabethton, Tennessee, a part of Moody Bible Institute of Chicago. He subsequently earned a certificate from the Federal Aviation Administration (FAA) as a commercial pilot, mechanic, and FAA inspector. In 2010, he graduated from Eastern New Mexico University at Roswell with an Associate of Applied Science degree in aviation maintenance technology.

He maintains close ties with the Holston Annual Conference and Wesley Memorial United Methodist Church in Johnston City, Tennessee, where he is a member.

“I am so blessed to be a part of the ministry serving God’s people in Africa and around the world,” he says. He recalls with gratitude the influence of an aunt on his spiritual and professional life when he was growing up on the Kapanga United Methodist mission base. “We can only give back to God if we listen, accept, and obey his call to witness Him in this World.”