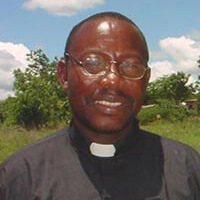 The Rev. Umba Ilunga Kalangwa is a United Methodist missionary assigned by the General Board of Global Ministries to the United Methodist Church in Tanzania as District Superintendent of Kigoma District & Director of Morogoro Pastors’ Training Center & Coordinator of the Reaching out Ministry in Rural Areas & Manager of the Wesley.

The Methodist presence in Tanzania is relatively new, and exists in large part because of mission outreach efforts by the North Katanga Annual Conference in the Democratic Republic of Congo (DRC). An ordained elder in that conference, Umba was assigned to an evangelistic ministry in Tanzania by Bishop Ngoy in 1992.

“We faced many problems. Many times we hadn’t enough money because we didn’t have sponsors or any budget,” Umba says of the experience he shared with the five other missionary pastors sent by Bishop Ngoy. “It is God’s will that our work and ministry is continuing in Tanzania. My district has some Christian congregations which are spread out in three regions – Morogoro, Iringa and Dodoma. Some people have decided to follow Jesus Christ. Among them two who were drunkards are now training to be pastors,” he reports. “God’s mission is to save people. I have trained local pastors. I have organized crusades.”

A native Congolese, Umba was born in Manono and lived there, in Lumbumbashi, and in Mwanza-Seya at different times as he grew up. Although his mother was Catholic, Umba began attending the Methodist Church in Mwanza-Seya. After graduating from school, he began teaching at a school in Manono where devotions were held every morning.

“Each teacher was chosen to lead devotion,” he says, recalling his path to the ministry. “At some point, the students nicknamed me ‘pastor’.” This proved to be prophetic, and after four years of teaching, Umba began his studies at the School of Theology in Mulungwishi.

Rev. Kalangwa was ordained as an elder in the conference in 1986 and received his B.A. in theology from the Methodist Faculty of Theology in Mulungwishi, in 1989. He served as a pastor and District Superintendent in Luena, DRC, from 1989-91, and as a pastor, chaplain and educator in Manono and Mwanza before that.

His mother and stepfather still live in the DRC, where his stepfather, Rev. Banza Bondo, is a United Methodist pastor in the North Katanga Annual Conference.