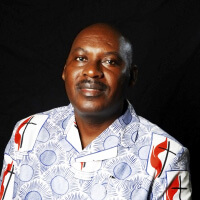 The Rev. Joel Ncahoruri is a missionary with the General Board of Global Ministries of The United Methodist Church currently serving as Malawi Provisional Annual Conference in Malawi.

Joel worked in the area of mission finance in Liberia and, earlier, in Sierra Leone. He was commissioned as a missionary in 1999. He is originally from Burundi in the East Africa Annual Conference and was ordained in 1983. He was treasurer of the United Methodist Church in Burundi from 1980 to 1991, and worked for the African Church Growth and Development program from 1991 to 1997.

Joel understands his role in mission as supportive of the gospel of Jesus Christ, assuring that funds are used in appropriate, accountable ways. He shares how his calling began in his youth:

After the completion of my secondary school in 1978, I was assigned as an assistant administrator to the pastor of my church in Burundi. My duties included keeping the church car log book. The car was used to assist people in the surrounding rural community to transport patients to a distant hospital under a mileage fee for upkeep. I was very careful in handling the income and the way I handled my small job impressed the future Bishop John Alfred Ndoricimpa, who was then an evangelist and manager of a church print shop. I was called to work at the print shop as an accounts-trainee and later replaced my trainer, a missionary from the US. I came to realize the truth of what Jesus said: ‘Because you have been trustworthy in a very small matter, take charge of ten cities.’ (Luke 19:17)

A 1978 graduate of the Mweya Theological School, a secondary institution in Gitega, Burundi, he earned a B.A. degree in commerce, business administration (management and accounts) in 1998 from Daystar University in Nairobi, Kenya.