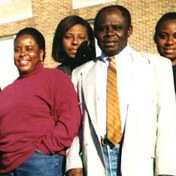 Serving At: MCCA Belize Honduras District, The Methodist Church in the Caribbean and the Americas
Home Country: DRCongo, Africa
WAYS TO REACH ME:
Email Me

The Rev. Nkemba Ndjungu, missionary with the Board of Global Ministries of The United Methodist Church, is serving withMCCA Belize Honduras District, The Methodist Church in the Caribbean and the Americas as pastor, trainer and mentor.

Born in Malonga, Democratic Republic of Congo (D.R.C), Rev. Nkemba’s previous appointments have been as a pastor in Kazembe and Lubumbashi and as a District Superintendent in Sandoa, all in the D.R.C. From 1998-2007 he served in Dakar, Senegal, where he was involved in evangelism, church-planting and theological education.

Rev. Nkemba took study leave from July 2007 to July 2008 and continued theological studies at Boston University. Prior to his commissioning as a missionary, Rev. Nkemba was a teacher in Kasaji and an accountant for the United Nations High Commission on Refugees (UNHCR) in Lubumbashi.

Rev. Nkemba earned a Master’s of Divinity degree in 1994 from the Faculty (College) of Theology in Mulungwishi, D.R.C. He graduated from the Kimbulu-Kayera Seminary of Theology in D.R.C in 1984 and studied at the Institute Kamanyi from 1971-77. A clergy member of the Southern Congo Annual Conference, Nkemba was ordained a Deacon in 1983 and an Elder in 1985.