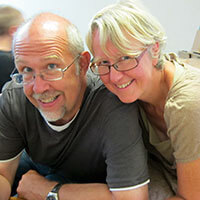 The Rev. William “Bill” Lovelace is a United Methodist missionary with the General Board of Global Ministries of The United Methodist Church serving as a Ministry to Migrants Consultant. He formerly served as a district superintendent and pastor in Lithuania. He also held similar positions in Kiev, Ukraine.

Bill served in the former Soviet Union since 1992, first as a pastor in St. Petersburg, Russia. From 1996 to 2011, he served as superintendent and/or pastor in Southern Russia, Ukraine, and Caucuses districts of the Russia United Methodist Church. His pastorates included the United Methodist congregations in Kerch and Billa Tserkva, Ukraine, and St. Luke’s Church in Kiev.

Bill was born in Orlando, Florida, and raised in Knoxville, Tennessee. He entered the ministry after spending almost eight years in computer science, once working primarily in the defense industry. His participation in the secular work sector helped him perceive needs of people outside the influence of the church. He eventually joined First United Methodist Church, Carrollton, Texas, where he taught Sunday school, evangelism programs and home Bible studies.

After leaving the computer science field in 1987, Bill worked as a volunteer with Cambodian refugees in San Diego, California; a summer intern at First Church, Carrollton; a summer chaplain at the Veterans Hospital of Lexington, Kentucky; and a tutor in English for Japanese professionals.

Norway, like the rest of Europe, has seen a rapid rise in immigration. In 1992, the immigrant population of Norway was 4.3%; by January 2017, that figure had increased fourfold to 16.8%. This growth has caused skepticism toward immigrants among the native Norwegian population and has challenged The United Methodist Church to respond. This ministry context will benefit from Bill’s extensive missionary experience in Eastern Europe, his knowledge of Islam and his cross-cultural skills.

Bill holds a Bachelor of Arts degree in computer science from the University of Tennessee at Knoxville and Master of Divinity and Master of Theology degrees from Asbury Theological seminary, Wilmore, Kentucky. A student of languages, he can speak English and Russian, and is studying Lithuanian. He is familiar with Ukrainian and Norwegian.

Rev. Lovelace is married to the Rev. Helen Byholt Lovelace, also a missionary.